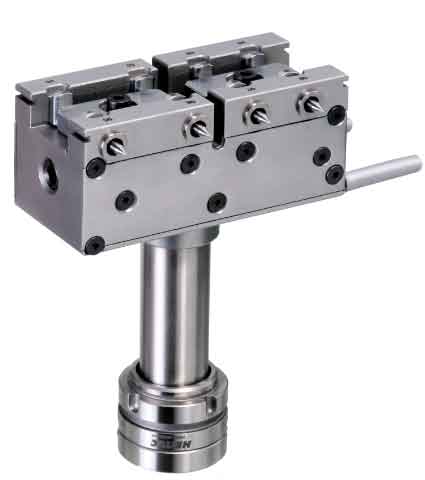 HeitecHeißkanaltechnik, Burgwald Germany, together with mold builder Amtec, Hohenwestedt Germany, developed a new hot runner system with reduced energy consumption producing syringe plungers for the medical industry. Both companies operating worldwide in the medical field have a long-standing partnership which produces many new developments. During the manufacture of an energy efficient injection mold producing 5 ml syringe plungers the engineers positioned 48 article contours linearly in the mold.
For the side injection of syringe plunger’s nozzles of type 01.076.44.08 were first used. Before, such nozzles were only laid out with a maximum of four tips per nozzle crown, but now the developers doubled the quantity of tips to eight. New materials and an improved position of the heating elements inside the nozzle crown reduce energy consumption per tip by 22 percent. By cutting the number of nozzles in the tool from twelve to six while maintaining the same number of cavities they saved an additional 50 percent of the separately heated nozzle snorkels. This further reduced energy consumption and allowed the use of a temperature controller with fewer control zones.
The changed mould concept and the linear arrangement of the article contours in the tool allows the direct injection onto the flange of the syringe plunger, resulting in uniform filling and virtually warpage-free parts with high concentricity. The linear arrangement in combination with the slim design of the hot runner nozzles reduces the cooling time and leads to an overall shorter total cycle time. 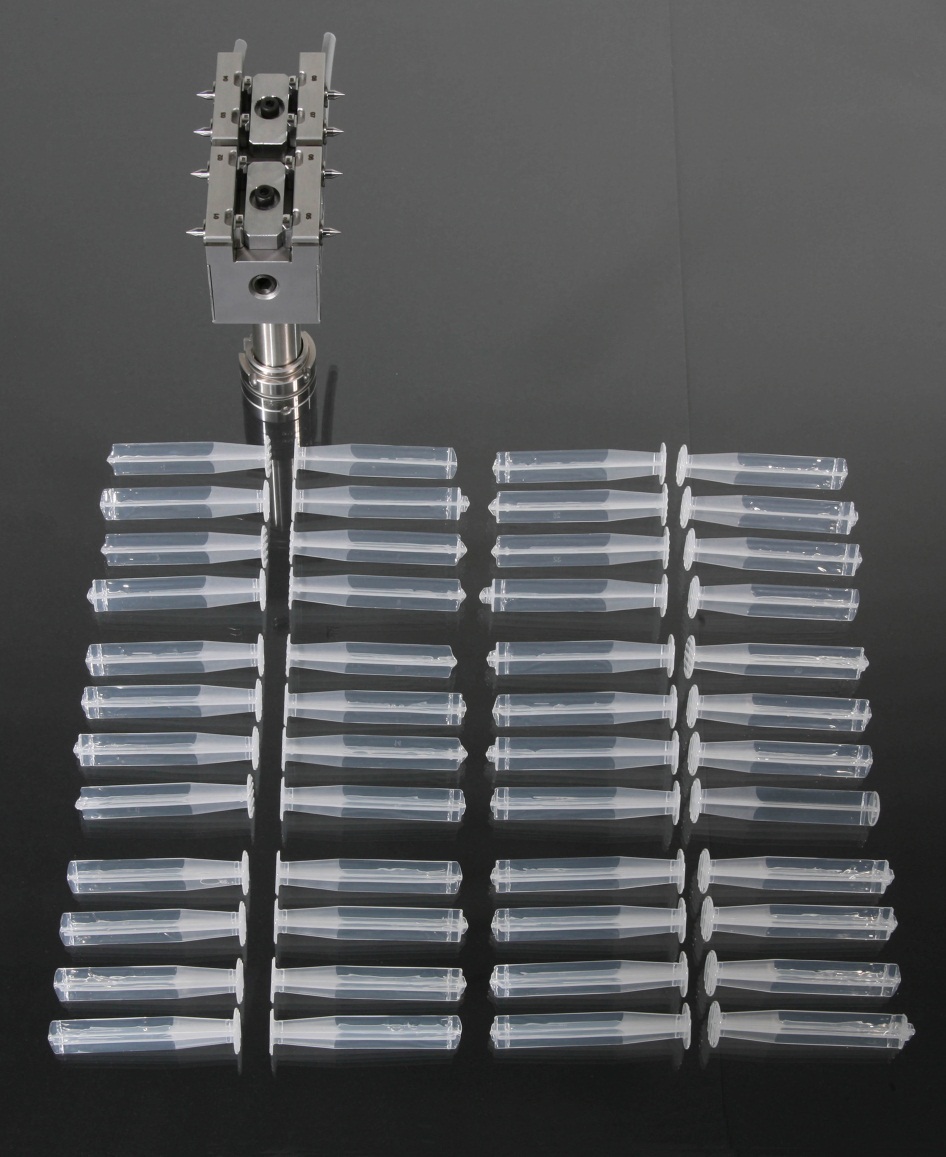 When injecting directly onto the flange a high quality gate vestige is essential. A string or high gate vestige would adversely affect the look and feel of the entire syringe because during use the flange is in direct contact with the user’s hand. A protruding gate vestige is not acceptable for hygienic reasons as well because this could potentially damage a glove when using the syringe. The side injection and the optimal cooling possibility of the article, the decoupled nozzle crowns, and the rheologically balanced hot runner system meet the requirements for the gate vestige quality. 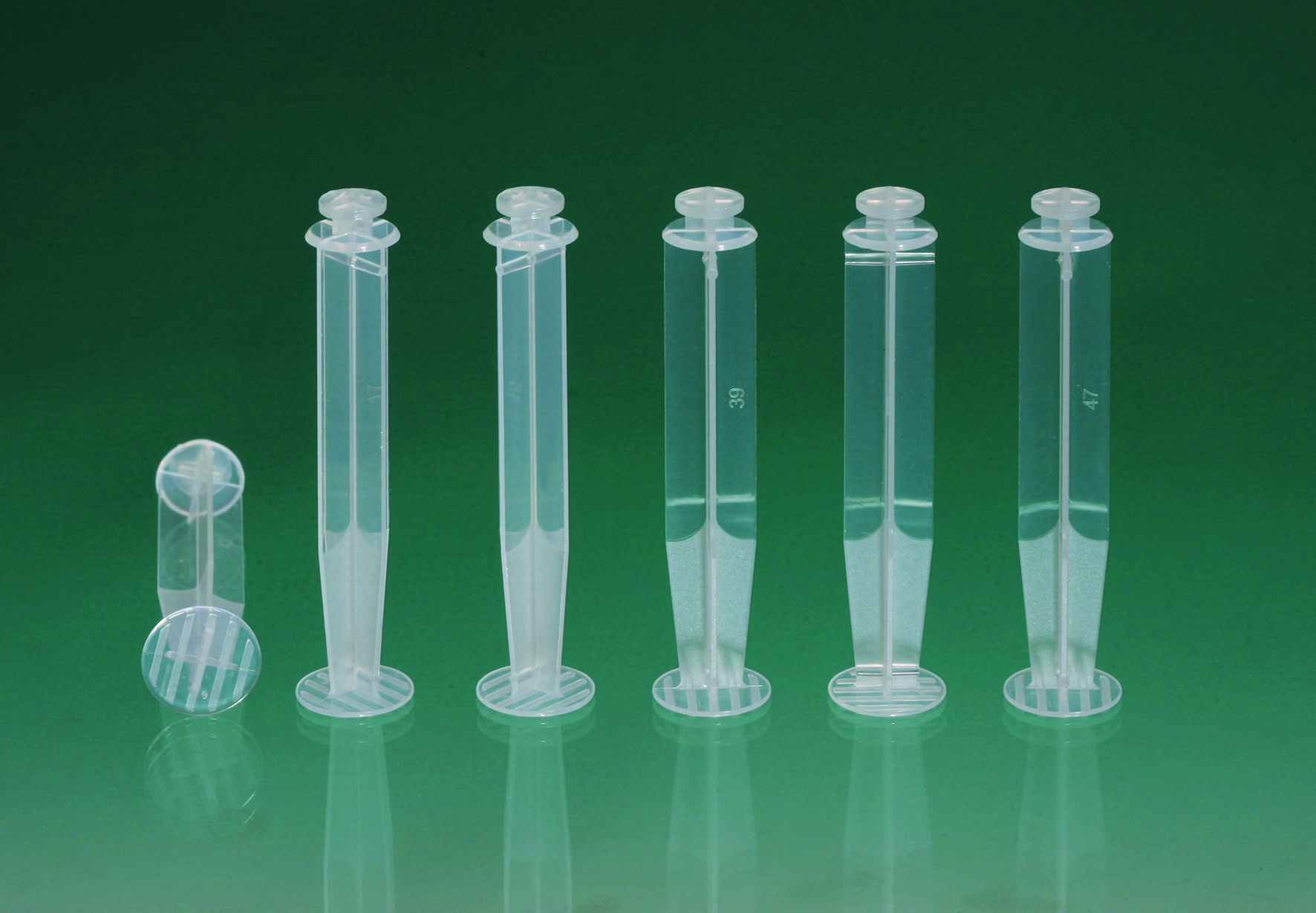 The advantages of the nozzles with decoupled crowns developed in Burgwald, Germany were incorporated without changes. The cleaning of air vents within the nozzle side of this tool without removing the nozzle or mould inserts, or the cleaning of contaminated gate well areas directly on the injection molding machine, for example, make this tool, in addition to high energy efficiency, user friendly and low maintenance.

In general a hot runner system separates the gating system thermally from the rest of the tool and is heated separately, so that the melt in the runner system remains continually fluid. This requires a fair amount of energy. It makes, however, longer flow paths possible because the pressure loss in the system is not reduced by cooling the melt and the associated increase in viscosity. With a compact design of the tool and a linear arrangement of the hot runner nozzles a hot runner manufacturer and a mold maker were able to develop an energy efficient side injection for the production of medical syringe plungers.